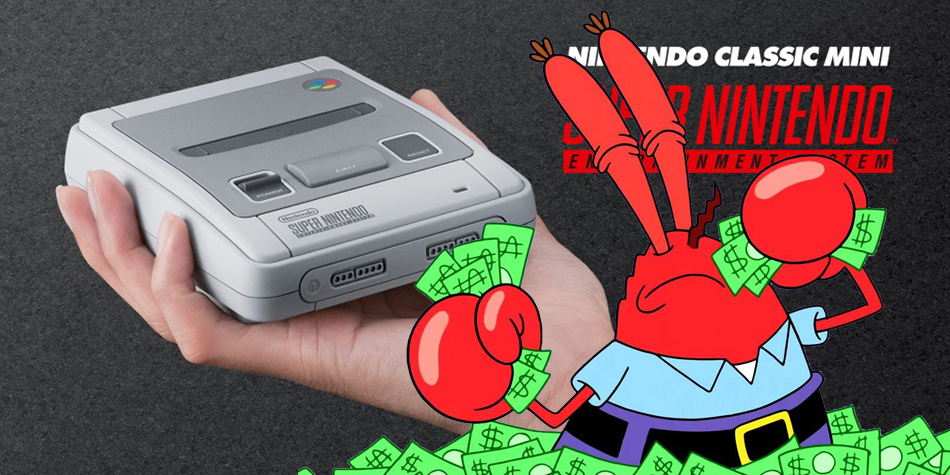 Yesterday/today, the internet (or, more specifically, the part of the internet in love with retro videogames) imploded.

Nintendo announced what we’d all known was coming: a follow-up to their unbelievably rare (that happens when you only make 17 of the things) NES Classic in the form of a *drum roll* SNES Classic. Ooh.

Yes, come September, you be able to get hold of what is, basically, a small-enough-to-fit-in-your-palm ROM-based machine, styled to look like a SNES but with no cartridge slot. It features 21 built-in games (all pretty solid classics and a few out-and-out all-time gems – games vary slightly according to region), and a couple of classic SNES controllers.

Hook it up to your telly and the world’s your mollusc as you indulge in the warm glow of nostalgia by romping through classic Ninty games from your childhood. All for about £80, or less than £4 a game. Including the hardware. A bit of a bargain, at first glance. And very cool.

Grown men whooped. People metaphorically (I hope) trampled their grandmothers to get hold of a pre-order. Howls of internet rage were heard worldwide as the scalper community descended like the hellish vultures they are. Needless to say, in less than 24 hours you couldn’t get a pre-order anywhere, rumours abounded of scalpers getting multiple pre-orders and SNES Classics were already getting listed for £200+.

I believe the kids refer to it as ‘scenes’.

NINTENDO, A SYNONYM FOR ‘BUNCH OF ROBBERS’?

Now, I’ve thought long and hard about writing this. As a fully paid-up member of the videogaming community and a full-on retrogaming nut, this kind of thing is right up my alley. I should be chucking my wallet at Ninty whilst yelling “shut up and take my money”, or some other such meme.

In all honesty, the whole thing makes me rather uncomfortable. Some of you may know that I’m not exactly a Nintendo fanboy. However, what you may not know is that I’ve owned a NES, SNES, N64, Gameboy and Gamecube over the years. Each replete with a stack of games. And I loved them. Genuinely, deeply, loved them. Nintendo have made, and continue to make, some of the finest videogames you’ll ever play. I’m not sure there’s a finer pure videogame out there than ‘Super Mario World’. And I’d argue to the death that the SNES is the finest console we’ve seen, with the greatest roster of games.

But there has always been the sneaking suspicion that Nintendo are ripping us off. The games are usually as or more expensive than anyone else’s but since the N64 days run on tech that’s pretty much a generation behind everyone else’s, and therefore much cheaper to manufacture.

Of course, this doesn’t mean Nintendo charged us less. Oh no. In fact, they usually charged significantly more, by comparison. For example: at the moment in the UK, a Switch with a game will cost you about £300 (or £280 with no games). By comparison, the much more advanced, far more versatile PS4 and XboxOne consoles can be picked up for about £220 with a game, or just under £200 on their own. Not to mention the fact that Nintendo consoles rarely drop much in price across their lifespan, in comparison to competitor’s machines. So the longer the machines are on sale, the more they make as manufacturing costs plummet after the first year.

Add to this that, while Microsoft and Sony fall over themselves to offer backwards compatibility and free games all over the shop, Nintendo milk every penny from gamers. Free games? Don’t be silly. Backwards compatibility? Hahahaha no. In fact, Nintendo’s usual modus operandi is to change the format with each and every generation (the Wii being a notable exception), thereby rendering your old console and games collection utterly redundant unless you’ve the space for yet another box under your telly. Every other manufacturer abandoned this practice years ago.

Naturally, with such an exceptionally rabid fanbase, heaven help the silly devil that puts his hand up and suggests that maybe, possibly, Nintendo are, how does one say it, taking the Mickey and that maybe the Emperor has no clothes. That would be videogame community suicide. Something I seem to be committing right now.

OOH! LOOK! I ONLY HAVE SIX OF THOSE…

This money-grabbing has gotten impossible to ignore though. The NES Classic and SNES Classic have been drenched in “we’re doing it for the fans” nostalgia-prodding marketing. Meanwhile everyone seems to be forgetting that, for any retro-gamer worth their salt, these are games you ALREADY OWN. Either the original cartridges and machines or Virtual Console editions. Some of you may even own multiple editions and variants of these games.

And what have Nintendo done? Shoved some ROMs on what is, effectively, a RaspberryPi in a fancy case, chucked in a couple of controllers and packaged it all up. That’s what, £20 worth of tech?

These machines are marketed directly at the hardcore Nintendo fans, numbers limited to drive the frenzy (and prices via scalpers) to unreasonable levels. It’s hard not to hold the opinion that Nintendo are taking advantage of the natural hoarding, collecting and completist nature many of us gamers have. If true, that would be pretty vile treatment of such a loyal fanbase.

The nasty taste in your mouth is the after effect of Nintendo reaching down your throat to extract that penny you accidentally swallowed when you were five.

Meanwhile, Sega have released a heap of their classic titles for free on mobile devices. Or made them available via the PlayStation Store or Xbox Live. Yet they’ve been getting grief on social media because the games will contain ads. They’re giving you them for free, people. FREE. You don’t have to buy any hardware, make any more space under your TV, or purchase a game you already have seven copies of in different formats. That’s extraordinarily generous. Perhaps this generosity and thought for gamers explains why Nintendo are still manufacturing hardware and Sega aren’t.

At the same time, Nintendo have gone full Dick Turpin and everyone seems to be throwing them a party. I can’t help feeling that Nintendo see gamers, especially the hardcore collectors and loyalists, purely as cash-cows to be milked and milked hard, safe in the knowledge we’ll come back for more and tell our kids to do the same.

I’m certain they’re laughing at us behind closed doors…

“Hey, let’s shove £20 worth of cheap tech filled with stuff they already have under their noses and demand £80 from them!”

“That’ll never work, gamers aren’t that stu… Ha! What am I saying? New Mercs all round boys!”

I’m pretty sure we’ve seen Nintendo’s attitude somewhere before. I present Exhibit A:

In conclusion. Are you a retro-gamer that loves Nintendo’s games? Awesome. You should. They’re ace. But you’ve given them enough over the years. Don’t buy into this ridiculous hype. Don’t throw more money their way for the same old games you’ve already bought, probably more than once.

Do yourself a favour, get a RetroPie instead. You’ll spend about the same, but you’ll have access to pretty much every retro videgame ever made, on almost every system you can think of.