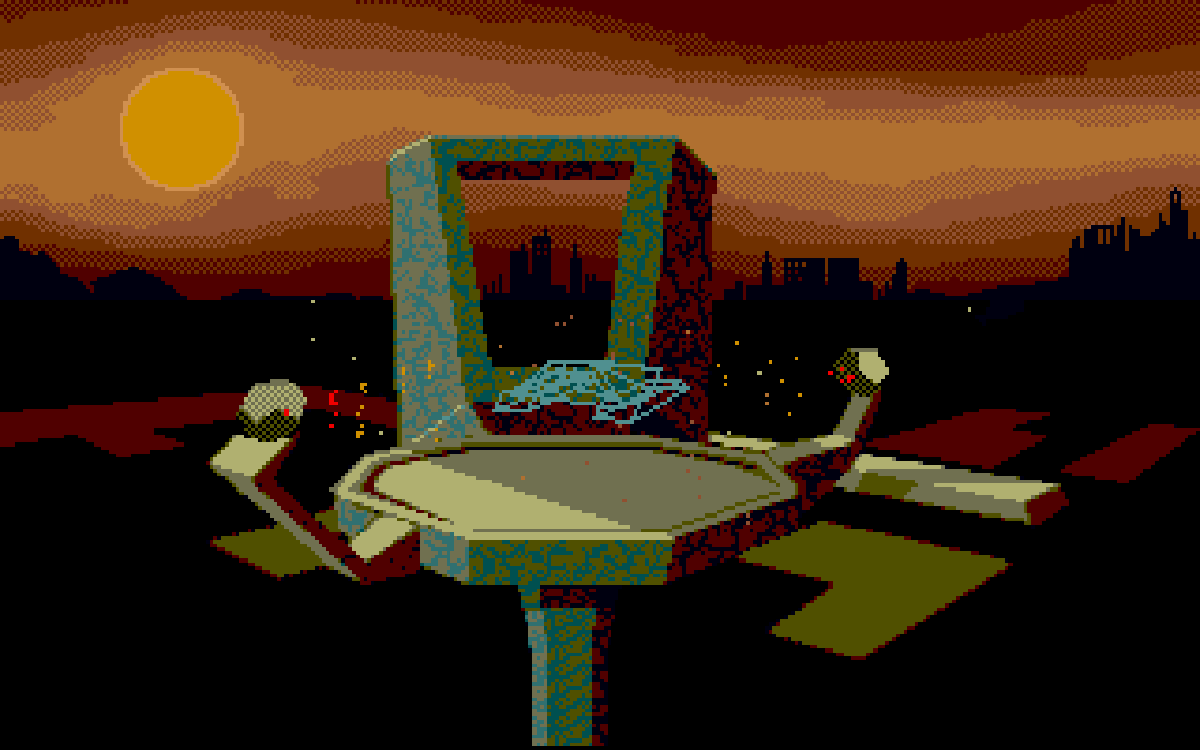 I can imagine the puzzled frowns already. “Simul… what now”? Simulcra. It’s a fantastic 16-bit action title, that was criminally ignored at the time and is now, inexcusably, almost completely forgotten. Still thinking: “Nope, sorry, never heard of it”. Well, read on and find out…

The story goes something like this (engage “voiceover guy” voice now): After centuries of war, and desperate for peace, mankind created the Simulcra unit. The idea being that international disputes could be fought in a simulated, virtual environment. Unfortunately (and rather predictably), it all goes horribly wrong – the system goes completely nuts and starts generating war machines to attack the real world.

Mankind’s only hope is for you to sever the power lines that feed the Simulcra unit. Naturally, the Simulcra is expecting this  (wouldn’t be much of a game if it wasn’t) and isn’t planning to go quietly. Let the blasting commence.

The story of Simulcra may not be entirely original (*cough* Terminator and War Games with a touch of Tron for good measure *cough*), but this was the early 90s. Nobody cared about that stuff. What we wanted was technical excellence and addictive play. And that’s precisely what we got.

IT’S LIKE CHEESE, BUT WITH LASERS AND ADDED PURPLE.

You control a special vehicle known as an ‘SRV’ that, bizarrely, resembles a wedge of purple cheese. With yellow retractable wings. I think this may have had more to do with the limitations of late 80s gaming hardware than any Prince-style purple/cheese fetish the developer had. Probably. But again, this was the late 80s/early 90s so, y’know, a bit odd.

Anyhoo, as you zip about the game-world you have to battle the machine hordes of the Simulcra unit, gradually opening up the map as you break through the energy walls that block your progress. I realise this may sound rather dull in comparison to modern epics. But it’s a simple, speedy, addictive and challenging little title that revisits the frantic, intense scrolling shooters of the time, but in an all-new polygonal frock.

The key aspect to the game was that your SRV had the ability to switch between the basic purple-wedge-of-cheese-tank-thing form and a low-flying purple-wedge-of-cheese-jet-thing mode. This added a dimension to the gameplay that, at the time, was truly unique and properly impressive. Combined with the stunning (again, for the time) full-colour, filled-polygon graphics, super-fast gameplay that never missed a beat (even when the screen was buzzing with enemies and laser fire), and some wonderfully atmospheric sound, it really was an underrated gem.

The only real problem was the difficulty. Starting off was an enjoyable and well-balanced experience. However, the game soon became really quite tricky, with later levels seeing you ducking and weaving through a veritable hailstorm of laser and missile fire as you battled to take out the energy projectors and gaaaaaaah no I’m dead again. But then, this was the dawn of the 16-bit era, and games were tough then. The were proper games. Games that could do a double shift down t’mine, go home and paint the spare room and still go out for a few pints afterward. But I digress.

Simulcra isn’t well known now. In fact, I’ve yet to find anyone except my brother that remembers it at all. This is a complete mystery to me. Offering as it did a completely free-roaming world, in full 3D, running at a blistering pace and offering a real challenge, it should have been more widely known and appreciated. The answer to this crime of neglect is simple – wipe those doubting frowns away and hunt down a copy. You won’t regret it.