It cannot possibly have escaped your notice that today, May 4th, is officially Star Wars Day. A day to celebrate the greatest movie franchise in history and, some would say, the biggest thing to happen in popular culture since someone in a polo-neck jumper and silly little glasses coined the term “popular culture”.

I do sometimes wonder “why is it so popular still?” After all, it’s pretty derivative (I’m a huge Star Wars fan, but even I’ll admit that Lucas’ original trilogy makes rather large *ahem* nods to classic Japanese cinema, greek myth, classic stories and fables), a bit geeky and, to be honest, fairly standard sci-fi fare. Maybe the answer lies in my own relationship with the original trilogy. (Bear with me here, this might get a bit introspective.)

To provide some context for this ramble, I’m referring pretty exclusively to the original trilogy and Abrams’ rather stellar continuation (Episodes IV, V, VI and VII). I’m going to assume that I’m not too dissimilar to the majority of hardcore Star Wars fans of my generation – my first real experience of Star Wars was on TV. I’m guessing I was about 6 or 7, but I can remember it as clearly as if it was yesterday. I was at my grandparents’ house and, Episode IV (A New Hope) was on the TV. I remember being utterly mesmerised as Darth Vader strode into the Blockade Runner, terrifying and compelling at the same time. Then my grandfather emerged from the permanent cloud of cigarette smoke that surrounded him, just long enough to proclaim it “daft” and turn over to the football pools.

And that was that. I was hooked. Over the next few years, Star Wars films, videogames and toys dominated my life. It introduced me to sci-fi (and imaginary worlds in general) in a way that I don’t think anything else could have. By the age of eleven I was reading Arthur C. Clarke, Asimov and Philip K. Dick and dipping into the wider world of cinematic sci-fi (The Black Hole, Silent Running, 2001, Close Encounters, Starman etc.) – it felt like I really had found my “thing”. It helped that my younger brother loved it too. There’s less than 3 years between us and our love of Star Wars, sci-fi and videogames was the glue that bound us for a long time. Many of my most cherished memories involve me, my brother and a marathon sci-fi or gaming session.

As my love of sci-fi deepened, Lucas’ opus started to seep into everything I did. I was, and still am to a large extent, a loner. As a freelance designer and writer, you have to be happy with your own company. As a kid, I spent my time drawing, writing and making models (LEGO, cardboard, plastic – anything I could lay my hands on). But everything was sci-fi. Everything was Star Wars. It connected with my creative side in a way nothing else had.

My love for it wobbled a bit as I moved up to senior school in the late 80s. It wasn’t “cool” to be a sci-fi and gaming geek where I grew up, especially one that spent a lot of time drawing and writing and got good grades. Needless to say I was bullied pretty mercilessly, both physically and emotionally, throughout high school. Of course, this happens to thousands of kids every day, and I daresay it’s much worse in these days of always-on social media. At least I had a loving family to go back home to and the warm embrace of the futuristic worlds in my imagination to keep me going. I’d count the minutes until home time so I could finish reading a new sci-fi novel, drawing a comic, watching a sci-fi show I loved or playing a new videogame (invariably sci-fi).

I never did tell anyone how bad it got. I never mentioned the suicidal thoughts, the nights in tears dreading the thought of school the next day or the sickening terror that gripped me every single day for 5 years each time I walked through those gates. But I got through it. And I’m convinced, absolutely and completely, that Star Wars was a big part of that. It was my escape. A world I could control, filled with friendly, courageous and charismatic heroes that battled the vicious bullies of the Empire. It may sound trite to say it, but it really did give me hope. It made me think I could get through each day, no matter how bleak it seemed, because the little guy could win in the end. If a teenage moisture farmer from a dead-end world like Tatooine could do it, then so could I.

Looking back, it seems a bit silly. But at 11 or 12 years of age, this was incredibly real to me. The world I inhabited from 8am until 4pm every day was unreal, brutal, alien even. The wonderful, shining worlds of a galaxy far, far away were far more real, more accepting, alive with hope and all manner of fantastic possibilities. That was the world I longed to live in.

Obviously, as I grew up I came to see this for what it was – the desperation of a kid searching for purpose and acceptance in a world that he didn’t understand and that didn’t understand him. My days as a massive Star Wars fan seemed to be fading into the past as I grew up and ‘life’ took over. Sure, I still loved the films, but they were just that: films. 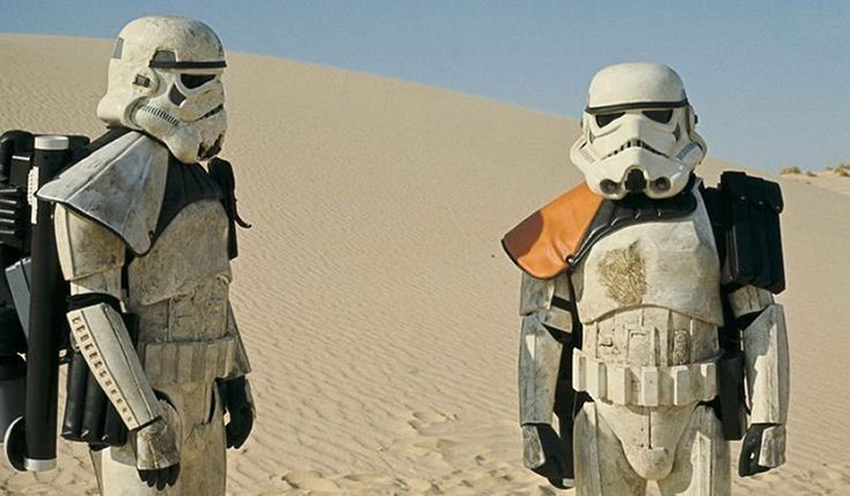 In fact, I had no idea just how much Star Wars meant to me until a few years back. The disappointment of the prequels (that’s it, I’ve mentioned them, it won’t happen again) hadn’t ruined my love for the original trilogy. Thank goodness. Quite the opposite in fact, they made me realise just how magnificent Episodes IV–VI were. Proper ‘lightning in a bottle’ stuff. I came to a new appreciation for them. Everything had character, was beautifully designed (McQuarrie’s work deserves a dedicated public gallery); wonderfully made and so incredibly REAL. Even the ships and robots felt truly alive. I still maintain that the one “character” they cannot kill off in the series is the Millennium Falcon, it’s that crucial. Which is amazing when you think about it – it’s a vehicle, why should we care? Yet I digress.

By this point I was a mildly cranky 30-something; then news broke that Disney had bought Lucasfilm and a new trilogy was on the way. Even better it would directly follow on from George Lucas’ originals. Naturally, I was excited. Mostly because I secretly (vainly) hoped that we’d see a version of Dark Horse’s superb ‘Dark Empire’ comic series on the silver screen. I kept the excitement at a manageable level as the rumours built (nothing worse than disappointment, after all). Then they announced J.J. Abrams was going to direct Episode VII and that was it. Complete geek out. All I needed was Firefly to be recommissioned and things would be exactly as they should be.

Anyhoo. Late 2015 arrived and the trailer dropped. I was giddy with excitement. Obviously I watched it about 97,571 times, mostly while holding in a squeal of delight. What I didn’t expect was my reaction to the trailer the first time I watched it. It was the big moment that did it. You know the one, where Han and Chewie step into the Falcon after about 30 years. Han’s face breaks into that wry smile once again and he utters the immortal phrase: “Chewie, we’re home”.

And that was that. I was sobbing. Not man-tears. Not a gentle weep. Proper, shoulder-heaving sobs. To this day I really don’t understand it. I’ve no idea why it hit me like that. But it did. And since then, my love for the franchise has completely re-ignited. I’ve also hit a real purple patch of creative/design thinking over the last few years. Is this a coincidence? Probably, yes. However, I like to think that, somewhere, deep inside me, that 11 year old kid has been woken up. That kid that stared at the stars every night and saw a million possibilities; that knew, for a certainty, that anything was achievable if you just took a shot. Because, hey, hitting that exhaust port was one-in-a-million, right?

(As a side note, I still struggle with depression and anxiety, which I’m convinced is rooted in my childhood experiences of being relentlessly bullied. I’m a lot better at the moment than I’ve been in a long time, but it’s there every single day. I still find a lot of comfort and safety in the imaginary worlds of sci-fi – it truly does calm me down. But that’s a story for another occasion.)

Maybe this is why it’s still so popular. Perhaps, as the world of entertainment is now populated with cynical anti-heroes, murky realism and grim darkness, a whole new generation (as well as us oldies) are (re)discovering the joys of seeing good triumph once more. Of seeing imagination and hope defeat terror and despair. I would love that to be the case.

So I just want to say thank you to all those involved with both the original trilogy and the latest trilogy. Thank you for helping a slightly lost and lonely kid unlock his imagination. For giving him a safe place to hide when the real world was just too much to bear. For providing him with hundreds of precious memories with his brother (we still go to watch every new Star Wars film together, although we live about 4 hours away from one another). For giving him somewhere to go, even as an adult, where imagination and hope are lauded and cherished; where courage, self-sacrifice and friendship are extolled.

I love you guys. But I’m sure, just like Han, you already know that…